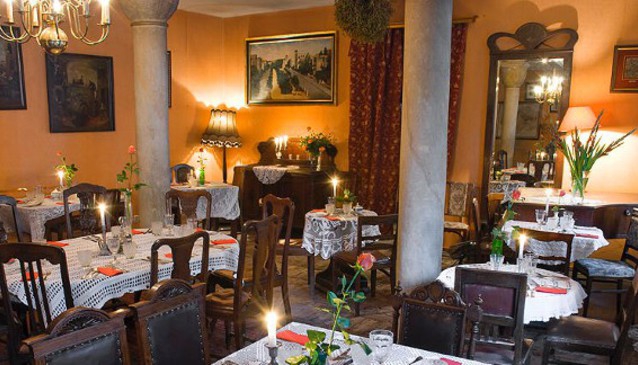 For over a decade Kazimierz, the old Jewish quarter of Krakow, has been flourishing as a prime nightlife and eat-out area. One of the neighborhood prides is vast range of classy dining venues and Klezmer Hois restaurant holds locals and visitors bloom choice, playing a role of a home to Jewish cluture as well. Its scene is a former mikveh (Jewish ritual bath house), which once was converted into hotel and restaurant and is situated in the north-western corner of Szeroka Street.

Klezmer Hois spacious rooms are parted into three sections, café, column and banquet rooms, accommodating comfortably up to 150 diners. When it comes to the menu, not surprisingly the focus is on the Jewish cuisine. However, they lack rabbinical supervision (no kashrut certificate), the full respect is set to the rules of kosher cuisine. The menu conception is, in the words of the founders, based on adventurous evolution, deriving from the idea of accumulating visitors feedback and travestying it into genuine and authentic recipes, the elements of which date back to pre-war times. Therefore, for a starter you might enjoy tasting Jewish Style Carp, speaking of which is a prime Polish fish, especially at Christmas time. The lengthy list of main courses draws customer's attention to a couple of signature dishes; Stuffed Goose Necks, Turkey Livers with Raisins and Almonds or Chicken in Honey and Ginger Sauce - all reasonably priced.

Home-made like decoration of the restaurant, makes you feel domestic ambiance but it's more like the memories of your grandparents oasis, full of senior photos and antique furniture. As the people behind Klezmer Hois claim to have been the pioneers in promoting the Jewish culture in Krakow, it's not surprising that the restaurant is the addition to other activities in this field like publishing house or a bookstore. But it's the personality of Leopold Kozlowski, famous musician and composer, making the restaurant unique and lively and some stars of international culture like Steven Spielberg or Roman Polanski enjoyed musical events in Klezmer Hois. The Jewish and Klezmer music is so well catered for that you will surely take pleasure in the dessert tunes resounding regularly in the evenings.