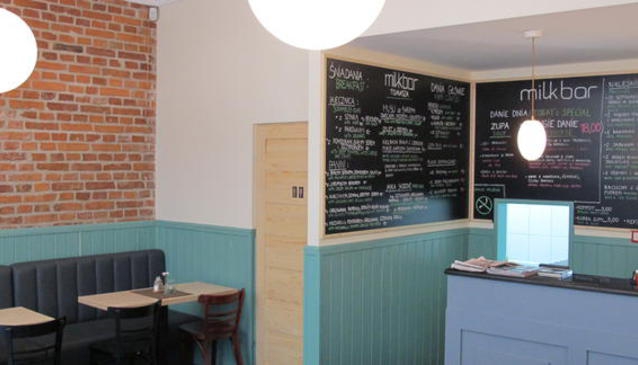 Back in the good old (?) Communist days, every neighbourhood would have at least one 'Bar Mleczny', or Milk Bar. These were state-subsidised workers' dining rooms where one could get a solid hot meal in the middle of the day at a very reasonable price. Simply furnished and undecorated except for maybe a plastic geranium or a faded photo of the Polish national team that reached the World Cup semi-finals in 1974, the day's choices would be indicated on a blackboard and served up by unsmiling women in white overalls.

Nowadays very few milk bars remain, and those that do are no longer state-subsidised. However, the idea of a simple eating-place serving reasonably priced tasty food is clearly a good one, and the recently opened Milk Bar on Tomasza Street in the heart of the Old Town is just such a place.

The interior is simple - or understatedly stylish - and the menu (in both English and Polish) is on a large blackboard behind the counter where you order. Cleverly, the menu manages to combine the traditional milk bar virtues - a 'dish of the day' where you get a choice of a soup and main for about the price of a starter in a cheapish restaurant; Polish staples like pierogi and potato pancakes; and a range of non-alcoholic beverages - with some interesting twists and innovations: a diverse breakfast menu, a selection of paninis with various enticing fillings and a list of sweet and savoury pancakes.

That Milk Bar is equally popular with both the more traditional citizen of Krakow, as well as visitors from abroad wanting a tasty bite in simple surroundings at a sensible price, is testament to the success of a good idea executed well. Oh, and the staff wear black and smile quite frequently.