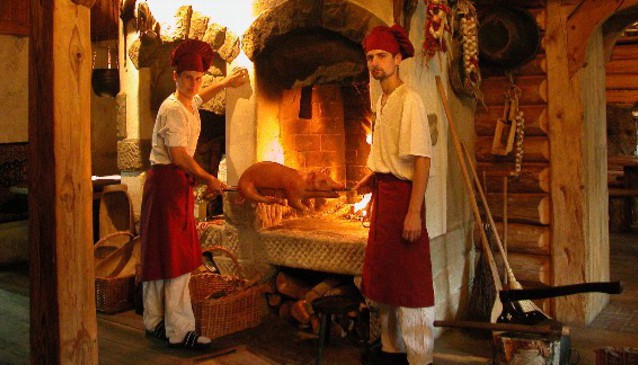 If you dream of being transported back to the seventeenth century, to the resplendent rusticity of the old Commonwealth borderlands - where the textures, colours, tastes and music of Polish, Lithuanian and Ukrainian culture collide - then Ogniem i Mieczem is for you.

Guests are invited to sit down to a traditional feast in one of four exquisitely recreated rooms, to the strains of old Polish, Lithuanian and Ukrainian folk music and a crackling fire in the hearth. The walls and corners are adorned with heavy skillets, sheaves of hay, old wooden tools and household instruments, including a spinning wheel, churns and even a hussar's suit of armour. Rough wooden tables and benches are lit by thick candles in pewter candlesticks and heavy iron candelabra. Animal skins are stretched taut under old portraits. Even the waitresses' attire is a work of costume art taken straight out of Sienkiewicz's book.

Not only the décor is meticulously researched; the authentic historical recipes were pulled up from the archives of the Jagiellonian library. The culinary journey in itself transports guests to another time. The breakfast menu includes a hearty serving of scrambled eggs made from a full dozen; the soup menu covers everything from barszcz to zurek with horseradish, egg, ham, sausage and bread; starters highlight all the traditional favourites, with the classic bread and smalec (seasoned lard), sledz (pickled herring), sausage, and potato pancakes. Alongside a selection of meats, fish and fowl, and pierogi that range from savoury to sweet, the discerning guest is invited to sample exceptional culinary treats such as half-metre beef ribs, pork knuckle, garlic-seasoned duck, baked ham, and game hen in a honey and garlic sauce. There's sweet honey vodka to wash it all down, as well as one-litre servings of Zywiec, wine by the jug, mead, grzaniec (mulled wine), and various vodkas. In a city replete with tradition and opportunities for cultural immersion, for the adventurous traveller seeking something out of the ordinary, this slice of Polish history stands out.