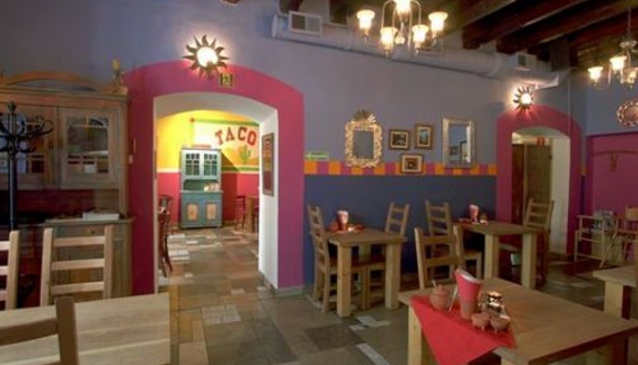 Hugely popular with locals, Taco Mexicano's kitchen stays open until relatively late, making it a good choice for last minute diners. The exotic, even extravagant, interior spreads over two floors, with walls painted in bright hot colours, light wooden chairs and tables, and liberal applications of marble and terracotta tiling to the restaurant's floors. There are plenty of semi-private alcoves - no doubt another reason why El Pueblo is so popular with dating couples.

Taco Mexicano's menu features a dozen or so tapas, with chorizo sausage, olives, peppers, prawns and goat's cheese all getting a good look-in. Moving on, starters include tacos, quesadillas, nachos and salads (including baked snails in garlic for the brave). There are thick Mexican-style soups, and then a range of main courses encompassing the inevitable burritos, enchiladas and fajitas, with a selection of grilled meat and fish dishes served with salad and either fried potatoes or rice. Be warned that the portions are very generous!

Drinks-wise there is a very reasonably priced wine list to accompany the typical selection of Polish beers (although imported Mexican Corona beer is available for the purist). However, it is in their range of cocktails, and in particular their selection of tequilas, that Taco Mexicano really comes into its own. A soundtrack of Mexican and other Latin music rounds off the experience.