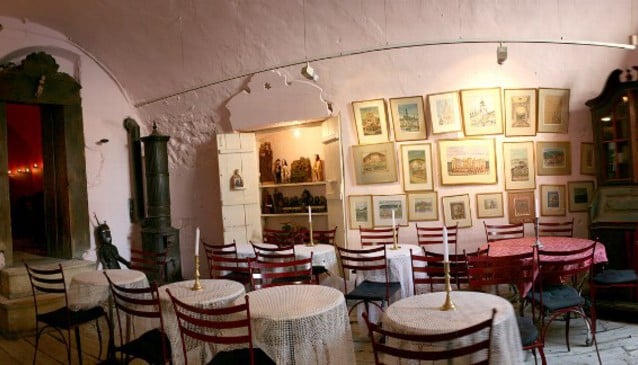 Of Cafe Camelot, his favourite Cracovian café, Washington Post writer David Streitfeld claims in an August 1998 article, '[it] might just be my favourite café in the world.' He praises what he names as Camelot's specialty - apple pie; but his most avid descriptions are of the café's unique, enchanting décor. 'It's spread over three rooms, one of which has a table perched in the window, if you feel like eating on a stage,' he writes of Camelot's layout, one he describes as unusual among Krakow's signature labyrinthine cellars.

A colourful history saturates the café's candlelight, rickety tables and lacey white tablecloths. In the early 20th century the location housed a brothel, longingly remembered by Cracovian artists. When the establishment fell into ruin, Camelot's old walls and interiors became a film set; the 1960's cult film 'Awantura o Basie' was made here. The spirit of moral unrest settled in as a permanent guest.

Camelot does not only offer a charming interior and rich history; its thirteenth-century cellars contain a small theatre, home to the comedy sketch group Loch Camelot, as well as frequent concerts and recitals. An upstairs gallery covers two floors, and presents events such as photographic exhibits, talks and various artistic happenings.

The ferment that defined Camelot's spiritually rebellious past still seduces visitors today. Against the walls rest cross-eyed figurines of naïve art; upon them hang letters signed by 16th-century king Zygmunt August and a collection of Nikifor paintings.

On offer, apart from the most famous szarlotka, or apple pie, in the city, is a rich array of the café's own homemade baked goods, dishes and drinks, including mead, liqueurs and mulled wines, thick hot chocolate, and pasta in cream sauce - the rich menu unchanged to this day.