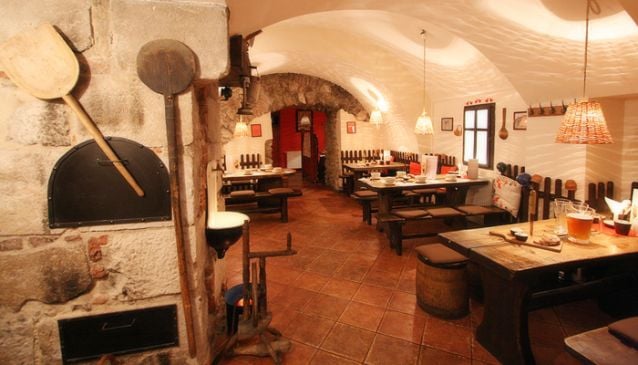 As the octopus of cosmopolitan eating spreads its tentacles around Krakow, so the reinvention of Polish traditional countryside cooking continues. One of the trailblazers in this regard is the barely pronounceable (by Brits at least) Chlopskie Jadlo, which approximately translates as peasant cuisine. Chlopskie Jadlo is in fact a chain - the first one opened in 1995 - but each branch is unique and crafted somewhat in the style of an ethnographic museum.

The branch on Grodzka, just down from the Main Square, has the look of a generously proportioned peasant kitchen: rough-hewn woodwork, walls painted in bright blues and rich reds, dressers laden with typical Polish crockery, and everywhere huge iron cooking pots and other cooking-related trivia adorning the walls and shelves.

Part of the tradition at Chlopskie Jadlo is the Polish welcome of dark bread and smalec - a delicious savoury spread made from pork fat, herbs and spices. From thereon in, the menu is pure Polish traditional: hunters' stew, mince-stuffed cabbage leaves, pierogi are all unavoidable if you want to claim to have sampled real Polish cooking, but there are plenty of equally tasty but lesser-known options available. On the liquid front, you can enjoy a glass of mead or mulled wine, or share a pitcher of red or white wine. Or you could have a beer, of course.

The mission statement and formula at Chlopskie Jadlo is simple and straightforward - you won't find any spaghetti sneaking onto the menu here - and the blueprint has been worked on for more than fifteen years. So: traditional Polish cooking while sat in a traditional 19th century Polish country kitchen, right in the centre of Krakow... nice!