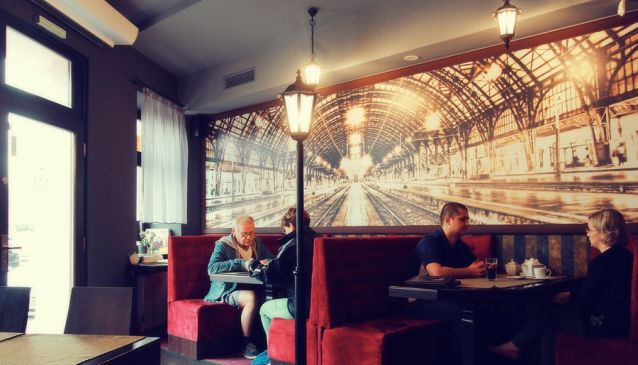 For a rather lengthy period in the past, Poland didn't exist as a country, and for the latter part of this period Krakow was part of a subdivision of the Austro-Hungarian Empire known as Galicia. Between 1846 and 1918, Galicia extended from Krakow in the West to beyond Lwow (Lviv) in what is now Ukraine to the East, and southwards to what is now modern Romania. In 1892 a rail network was completed that connected all the major cities West to East from Krakow to Tarnopol, whence one could travel further East into Russia.

It is with this brief fragment of history that one approaches Galicja Po Kolei, a modest-seeming restaurant next to Plac Bohaterow Getta in Podgorze. The name translates as 'Galicia by rail', and is fitting both from the point of view of décor - one wall is entirely given over to a panoramic view of Budapest's magnificent main station - and from the menu. Galicia was known for its ethnically diverse population, and the restaurant has exploited this fact rather neatly by designating different days' menus by nationality. Thus Monday is Ukrainian, Tuesday - Hungarian, Wednesday - Czech, Thursday - Slovakian, Friday - Romanian, Saturday - Polish and Sunday is Austrian.

Each day has a signature dish, while there is a standard menu providing more typical fare throughout the week. The chef knows his stuff, and the relative diversity is tempered by an understanding of what makes food good without charging the earth. A discounted lunch menu is also available.

What is particularly nice here is the way that wit and quality have been combined with value and friendliness: there is genuine variety and too many good dishes to single any one out.