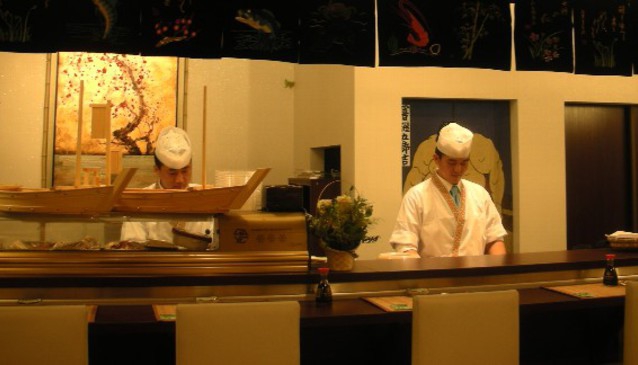 Sushi restaurants are becoming increasingly popular in Krakow, and rare is the neighbourhood that doesn't have one or two tucked away somewhere. Genji Premium Sushi, located at 55 Dietla Street, has an ace up its sleeve, however, in that its authenticity is enhanced by its experienced Korean chefs. With its location on the north-western edge of Kazimierz, and barely 5 minutes from the Old Town, Genji is popular with both local businessmen and more discerning tourists.

Arranged on two levels, with a sushi bar on the ground floor and several rooms downstairs - including an 8-person 'tatami room' with its floor covered in dried rushes after ancient Japanese tradition - the restaurant is beautifully decorated, with just a hint of kitsch in some of the touches.

The menu is extensive and features a variety of sushi and sashimi 'sets', with lunchtime 'bento' box assortments at a range of prices and sizes, as well as more elaborate selections for the more leisurely diner. There are also hot Japanese and Korean dishes, such as chicken with teriyaki sauce, or grilled marinated squid in sweet and spicy sauce, which come with rice and three side dishes. Additionally, Genji offers a selection of soups, salads, noodle dishes and various appetisers.

Obtaining the super-fresh fish needed for quality sashimi and sushi in Krakow does not come cheaply, and Genji's prices, while reasonable by Western European standards, are definitely proportionate to the quality. In a city where the quality of sushi can be distinctly variable, Genji is one Japanese restaurant that can be confidently recommended, and one frequently used by Krakow residents to impress visiting foreigners.