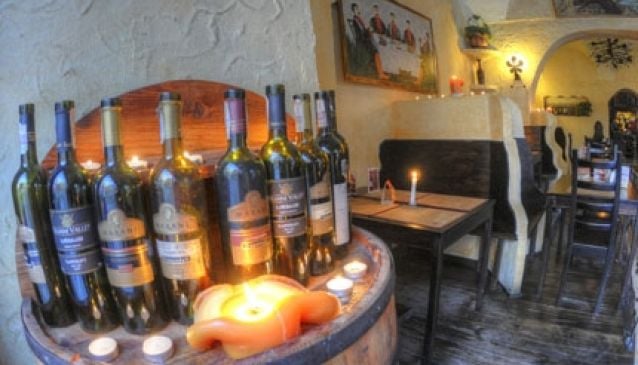 Gruzinskie Chaczapuri (Georgian Chaczapuri) has become a popular chain restaurant in Krakow for both tourists and locals, with five locations already scattered among the Old Town streets. However, while the name may suggest Georgian cuisine, the owners emphasize the fact that they would rather say 'international cuisine with the stress on Georgian tastes' to be precise. Originally, the founders' fascination with eastern food derived from legendary Georgian hospitability and stories of their wassails watered with wines from local bodegas.

Each of the restaurants have rustic interiors, but it's 'what's on the menu?' that is most essential for the visitor. Behind the dish names, which sound somehow exotic, lies a vast selection of grilled pork or chicken as well as marinated chops and fillets. The menu is quite long, however a few signature dishes need to be mentioned. Firstly, there's the Chaczapuri - traditional Georgian cheese pie stuffed with a variety of meats and roast cheese, and served with a selection of salads and sauces. Another original option is Lawasz - thin bread, a little like Mexican tortilla, with stewed vegetables and meat varieties. You will also find vegetarian options here: key dishes can be prepared as a no-meat preference and Aczma, with spinach and cheese or pepper might also be a veggie choice. For wine enthusiasts there is a selection of Georgian wines, from inexpensive to pricey choices.

While most of the dishes seem pretty inventive, it's nevertheless the prices which often makes their restaurants crowded. As the tastes are often variable, for some the price is primary and here Gruzinskie Chaczapuri surely wins its clientele.