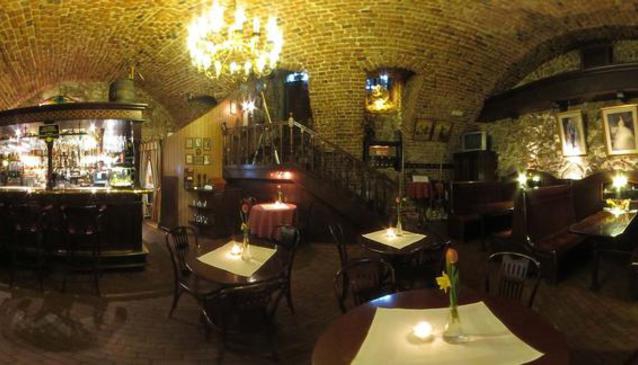 Despite the lack of autonomy as part of the Austro-Hungarian Empire, artistic life in Krakow during the reign of Emperor Franz Joseph (1848-1916) was not too bad. It was during this period that Krakow experienced its own Belle époque, and where writers, artists and composers flourished. There are a number of bars and restaurants in Krakow that celebrate this heritage, of which Pod Zlota Pipa, on Florianska Street, is one of the most notable.

Although augmented in the summer by a garden to the rear, the main part of Pod Zlota Pipa lies below street level, in arched-ceilinged brick cellars of a type familiar to anyone who has spent more than a few hours in Krakow. The furnishings and interior decorations will transport you back to the time of Franz Joseph, and the cosy décor is equally suited to discreet dining as well as enthusiastic drinking. Fans of Graham Greene's Our Man in Havana may be tempted by a game of Pod Zlota Pipa's version of chess, where pieces are represented by vodka shots and must be consumed by the captor.

The more obvious literary connection, though, is that it takes its name (Under the Golden Pipe) from Jaroslaw Hasek's satirical novel The Good Soldier Svejk, whose eponymous hero would undoubtedly have enjoyed both the surroundings and the menu. The fare draws its cues from the culinary classics of the era, and is noteworthy both for its quality and reasonable prices (as well as impressive choice).

A fine selection of cocktails rounds off an experience that brings many visitors back again and again, and makes Pod Zlota Pipa a favoured meeting place for the cream of Krakow's society. The whole package is completed by a cheerful staff that is both humorous and welcoming.