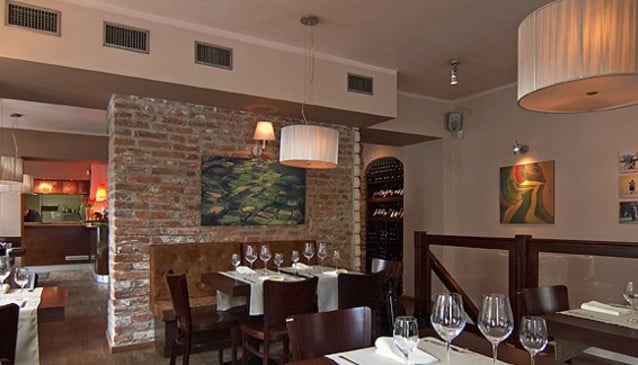 Pimiento claims to serve the best steaks in Krakow, a claim reinforced by the fact they import their beef directly from Argentina, home of what are generally considered to be the world's finest beef cattle. Opened in 2007 on the corner of Jozefa and Kupa streets in Kazimierz, Pimiento has quickly become a popular restaurant among discerning residents as well as tourists.

With a capacity of 80 people spread throughout four rooms and furnished in an understated modern style, Pimiento gives some notice of intent with its cowhide upholstery - militant vegetarians are not going to feel entirely at ease in this restaurant. Nevertheless salad and seafood options are available for those who prefer not to eat meat.

But it's the grilled steaks that are the main attraction at Pimiento: massive T-Bones, sirloins, fillets and rib eyes, at prices that initially seem expensive until you remember how much steak of this quality costs pretty much anywhere else in the world - at which point you understand why Pimiento gets so much repeat business. There are also pork and chicken options available from the grill. Side dishes include classics such as baked potato with cream and bacon, mixed green leaf salad, or perhaps rice, or fresh spinach with butter.

As befits a premium restaurant, Pimiento's extensive wine list contains some serious contenders from Argentina, Uruguay and Chile at suitably serious prices. However, their house wine comes at a very reasonable 55zl for a bottle of red or white, and there are plenty of other options in the sub-100zl per bottle range.